10 x must see sights and activities in Rotterdam

The story of the city, the bombardment and reconstruction, and the drive to innovate that locals still use today to shape their city all make Rotterdam a fascinating place to visit. Rotterdam is a must-see city with lots of attractions, monuments and architectural highlights to look out for. Find out where to go and what to do and discover the highlights of Rotterdam in this top 10 list of things to do and see.

Rotterdam Central Station is one of the most iconic architectural sites in Rotterdam. The roof over the tracks is covered in solar panels and the striking hall roof points towards the city centre. A number of historic elements from the former station building (1957) by Sybold van Ravesteyn have been re-used, like the original clock in the front façade and the letters spelling out ‘Centraal Station’.  In the main hall you can find several shops, information about public transport and the Rotterdam Tourist Information. If you’re looking for original souvenirs, don’t miss shopping at ‘Love Rotterdam. Gifts, Food & More.’

You’ll find an indoor market hall in various world-class cities, but the combination with luxury housing makes Rotterdam’s Markthal the first of its kind. The apartments are arched over the food market in a horseshoe configuration. The main hall houses the market itself, as well as shops and various restaurants, with a supermarket and a four-storey car park situated below. As you wander amongst the market stands, look up to enjoy the massive artwork sprawled across the ceiling: the ‘Horn of Plenty’ by Arno Coenen and Iris Roskam. Sign up for an Open Tour on the weekend via De Rotterdam Tours: a one-hour tour of the Markthal. Don’t forget to visit one of the country’s biggest outdoor markets which are held on the large square (Binnenrotte) in front of the Markthal (Tuesday and Saturday).

The Cube Houses (Piet Blom, 1978-1984) are part of the Blaakse Bos (Blaakse Wood) development which borders on the Laurenskwartier district and the Waterfront area. The architect wanted to design a kind of village within the city and saw the houses as trees and the whole area as a wood. The Cube Houses are tipped to one side as it were, making three sides face the ground and three face the sky. Don’t forget to visit the Kijk-Kubus (Show-Cube) to experience what life is like in a Cube House. 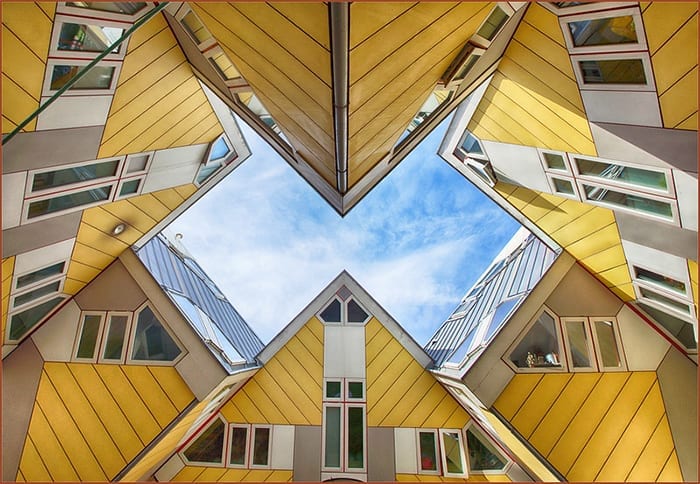 The ss Rotterdam (1959) is the former flagship of the Holland-America Line and boasts a wealth of history. The steamship was built in Rotterdam, returning to its home port in 2008 after many voyages and nautical miles. Since then, it has been moored at the tip of the Katendrecht peninsula. It’s used as a hotel, restaurant and events venue. The terrace on deck, including a small pool, offers a unique view of the city. The general areas on the ship, including the restaurants, are open to the public. The ss Rotterdam also offers various tours of the decks, corridors, staterooms and platforms, some lasting only an hour and others as long as two; the tours include an audiophone and additional explanations by the ship hosts. The tours show the amazing interior of a large luxury cruise liner and let visitors explore what life used to be like on board. The Rotterdam Complete Tour also includes a peek inside the engine room. 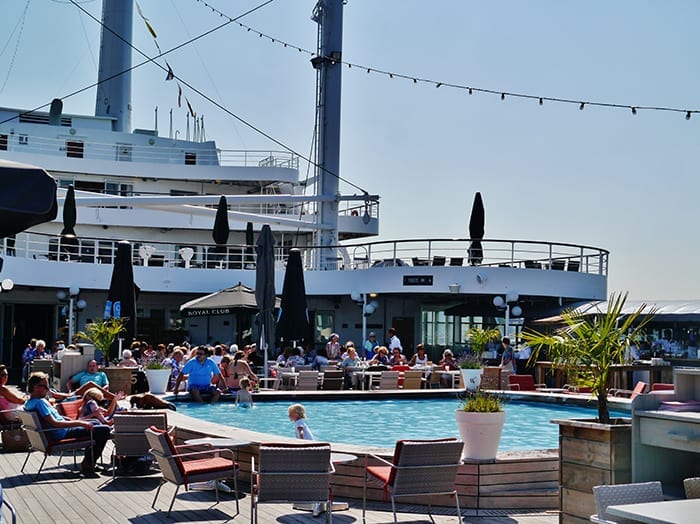 The 800-metre long Erasmus Bridge (Ben van Berkel, 1996) spans the Nieuwe Maas River and links the northern and southern parts of Rotterdam. The bridge is part of the redevelopment of an old port area and was specifically designed to be an iconic structure to give the area a strong presence. The suspension bridge has a 139-metre high steel pylon which is secured with 40 cables. The shape of the pylon gave the bridge its nickname: The Swan.

The Euromast observation tower was constructed to mark the Floriade gardening extravaganza in 1960. The tower, made from reinforced concrete, has an inner diameter of 9 metres with walls that are 30 cm thick. Its floor hangs 96 metres above the ground. The Euromast lift takes just 30 seconds to whisk visitors to a height of 100 metres, where there is an observation deck and brasserie restaurant. The Euroscope revolving lift takes people up to 185 metres. Euromast is Europe’s only attraction from which you can abseil to the ground. Of course, this only takes place under the guidance of a professional.

As a port city, Rotterdam has unbreakable ties to the Nieuwe Maas River. There are all sorts of ways to explore and experience the river and the port. Go on a tour with Spido, one of Rotterdam’s biggest attractions. The Port of Rotterdam tour (75 minutes) sails year-round and gives you a short but powerful impression of Rotterdam’s container ports. The route also passes sights like the Hotel New York, the Euromast, and the ss Rotterda 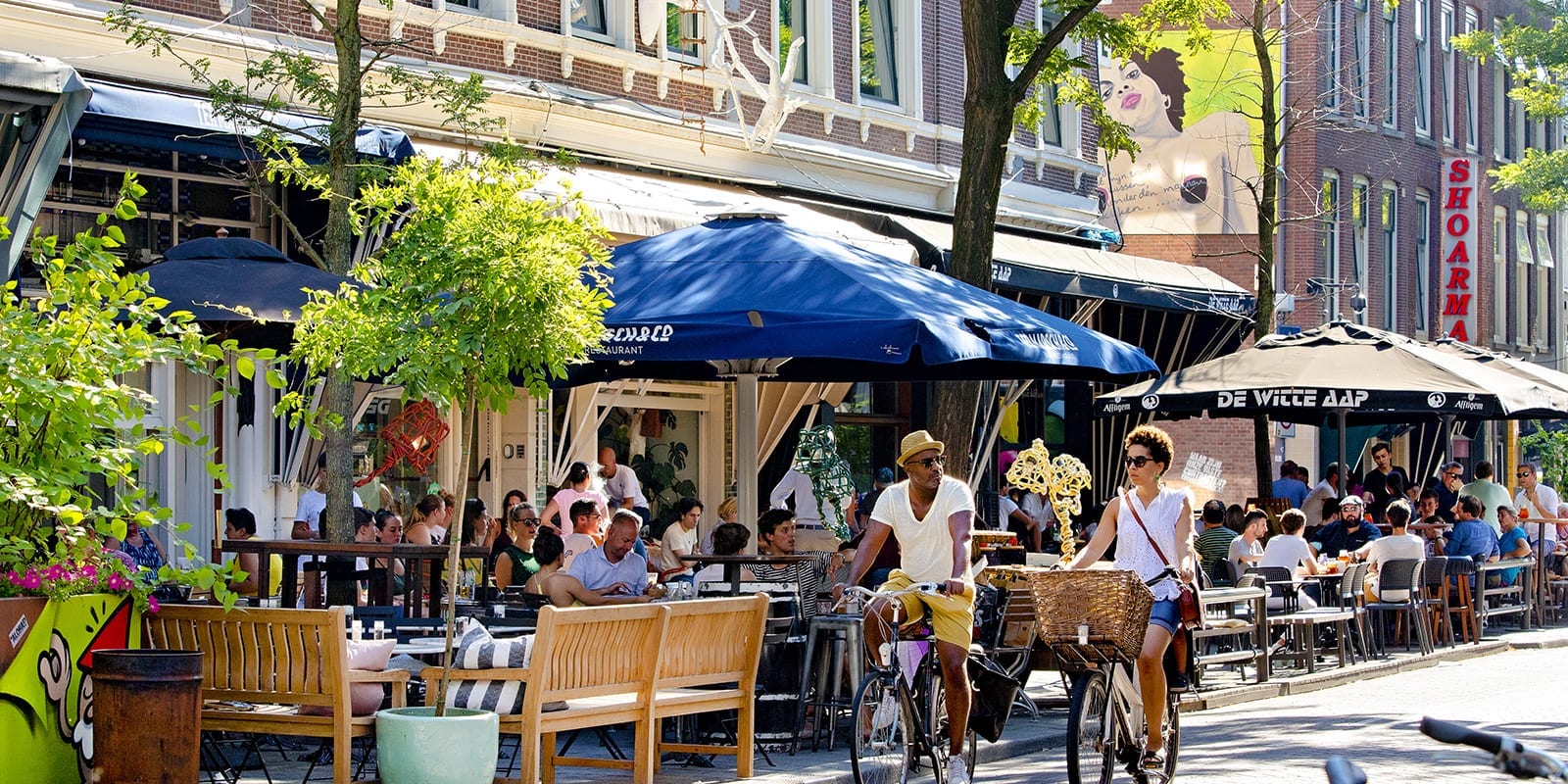 The ultimate arts and culture street in Rotterdam is known for its artistic, multicultural and lively character. Referred to as the city’s ‘Axis of Art’, it runs from the Maritime Museum to the Museumpark and is lined with galleries, avantgarde fashion boutiques, restaurants and (art) cafés. Fan of street art? Discover impressive wall paintings from local artists with the Rotterdam Street Art Route.

Rotterdam Zoo is situated in the district of Blijdorp, in Rotterdam Noord. Stroll across the African Savannah and stand face-to-face with the giraffes. Visit Bokito the gorilla and his family. Walk on the seabed in the indoor Oceanarium and meet stingrays and sharks. Stroll through the largest butterfly paradise of Europe: Amazonica, filled with fragrant flowers, thousands of South American butterflies, anacondas and piranhas that love to bite. Discover the special Monuments & Botanical route by downloading the English version of the Diergaarde Blijdorp app.

This picturesque yacht marina is one of the few parts of the old city that survived the 1940 bombardment of Rotterdam. It has a remarkable history, both as the departure point from which the Pilgrim Fathers sailed for America and as the birthplace of prominent Dutch maritime hero Piet Hein. Delfshaven locals once earned their living by fishing for herring and distilling gin. The historic canal houses now hold cosy shops selling antiques and bric-a-brac, as well as lovely cafés and restaurants like brewery De Pelgrim and café De Oude Sluis (with waterside patio dining).

This article originates from: RotterdamPartners.nl

Powerparking pilots its energy technology at The Green Village

The Hague’s best
Scroll to top